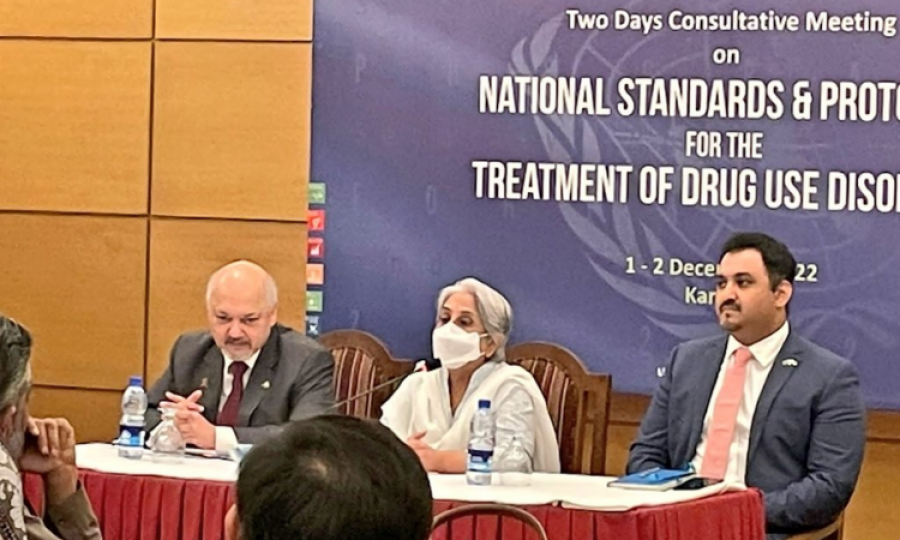 KARACHI: Sindh Minister for Health and Population Welfare, Dr Azra Fazal Pechuho attended the meeting by UNODC on National Standards and Protocols for the Treatment of Drug Use Disorders.

In the two-day workshop, there were representatives of the Balochistan Government, drug rehab and treatment centres, psychiatrists, psychologists, specialists on addiction and consultants on mental health as well.

Arsalan Malik stated that there is a great need to monitor human and drug trafficking as well as pay attention to prison reforms and developing standards for drug control.

By March 2019, UNODC had trained 100 trainers who are now capable of going on to train others. Out of a success rate of 77% in ICAP 1, 48 trained professionals were selected for the training of trainers.

Dr Manzoor ul Haq said that even though we have international standards already, we have to have those standards contextualized for our country and people.

Minister for Health and Population Welfare, Dr Azra Fazal Pechuho said that we need to move forward with empathy and come to terms with the fact that drug use is a social problem.  HIV and hepatitis are also rampant because of drug use as well as accessibility to the substance. She added that law enforcement and police has to be made sensitive to the issue rather than them being complacent. There should also be focus on providing drug replacement therapy that as of now isn’t supported by DRAP, but we do need it to ensure a sustainable end to addiction.

Lastly she thanked all the participants and said that it was a privilege being here with such knowledgeable people and she emphasised the need to have more centres for rehab and have psychologists and psychiatrists available for this effort, centres that are equipped with vocational training as well for people who are being treated and the people who are associated with the treatment.